is a four-seater, twin-engine aircraft with a retractable landing gear,
high-wing configuration with push-type propellers and comfortable passenger cabin.

The aircraft is adapted for day and night VFR flights, in the future also for IFR flights. The all-composite monocoque structure is made of carbon fiber with honeycomb core.

The wing, with foldable wingtips for easier hangaring, is equipped with aileron and electrically actuated flap. Two fuel tanks with a capacity of 200 litres each were built in the wings.

The fuselage in its front part is equipped with a large upward opening cabin access door and baggage hatch door in central part. Passenger cabin is equipped with four independent seats, front ones tilting and sliding. Seats are equipped with three-point inertial seat belts.

The combination of speed, safety and comfort makes business travel more efficient. In addition, a wonderful and unforgettable experience due to panoramic visibility will give a new quality to any business.

Getting on this plane is not a problem even for a woman in a long dress. See for yourself – you’ll get into the ORKA as comfortably as in your car! You don’t have to wait for the engines to stop – thanks to the ORKA propeller pushing system you will get off even after stopping on the airfield.

The aircraft is powered by two counter-rotating engines LYCOMING 10-320 / LIO-320 with a power of 160 HP each at 2700 rpm. This solution eliminates the so-called critical engine, which greatly simplifies the control of the aircraft in the event of switching off one of the engines. 3-blade “constant speed” type propellers from MT-Propeller are used. 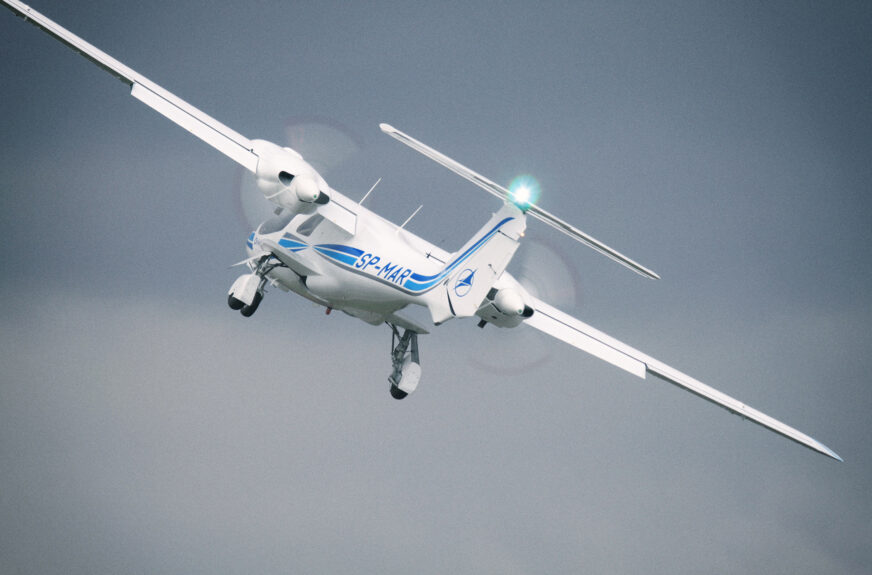 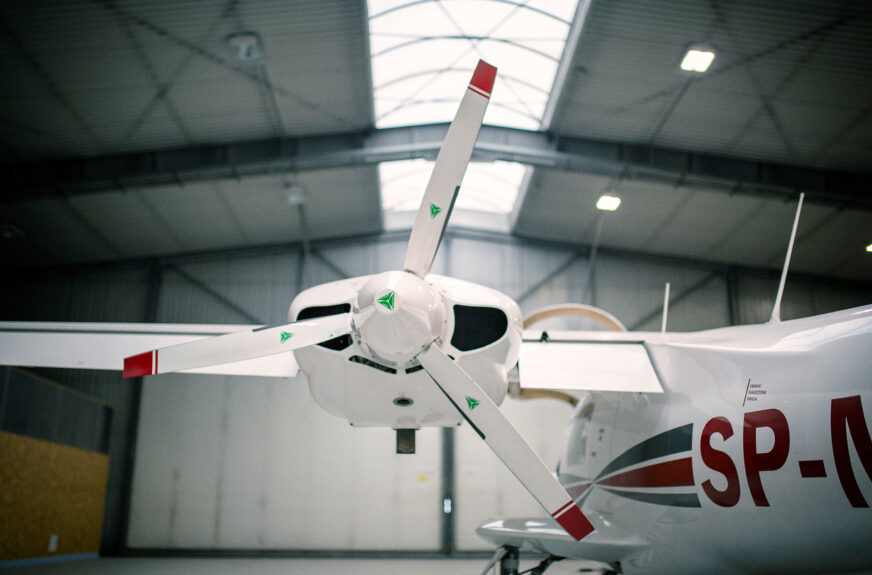 The aircraft participated in research and development program with the use of TP-100 turbine engines of the Czech production by PBS. Work on integrating the engine with the airframe was part of the ESPOSA project implemented under the 7th Framework Program of the European Commission.

The goal of the ESPOSA project was to develop new technologies for small turbine engines up to 1000 kW for the needs of Local Air Transport (SAT – Small Air Transport), as well as for applications in General Purpose Aviation (GA – General Aviation) or in unmanned aerial vehicles (UAS – Unmanned Aerial Systems). The project dealt with propulsion systems that will increase efficiency, improve safety and reduce pilot workload in the future.

A passenger cabin with very good access enables the use of the aircraft as a tool ensuring comfortable, fast and fully available transport over long distances. It is possible to convert a passenger cabin into a cargo cabin, which gives you the freedom to use the space available.

This four-seater with a spacious cabin is a great alternative to long-distance car travel both in one country and abroad. The ability to take-off from any airfield, including unpaved surfaces, incomparably facilitates the organization of flights. In addition, speed, comfort, range, load capacity and safety make it easier to get to your dream destinations.

This twin-engine aircraft with popular Lycoming engines and retractable landing gear is an ideal solution for both training centers and for aviation companies that want to improve the qualifications of their pilots. It provides excellent conditions for training on multi-engine aircraft, very good performance, high level of safety and flight comfort, all at an extremely affordable price and reasonable operating costs.

Twin-engine, large safety margin, a large range enabling long-time flights, panoramic visibility from the cabin make it suitable to perform as a patrol aircraft. If we add the possibility of installing a wide range of observation and reconnaissance equipment, we get the perfect tool for companies and services that need to perform such tasks in a cheap and reliable way.

The cost of one hour of flight is $ 177 and is about 10% lower than the cost of a similar class of aircraft (assuming 500 hours of annual flight, without depreciation).

Travel comfortably – in ORKA you can work or rest freely during the entire flight.

Excellent visibility around the cabin

Enjoy the views without any restrictions – from the ORKA’s cabin you can observe almost the entire space not only in front of, but also above and below the plane.

Impressive for this class of aircraft – you can reach any goal within a 1,700 km radius without any stopovers.

So far, you couldn’t land at many airfields? Now, thanks to the special design of the ORCA landing gear, you can also land on grass landings.