The history of Zakłady Lotnicze Margański & Mysłowski
dates back to 1986

In 1990, the company's activity was expanded to include glider structure design.

In just 26 months, prototypes were designed, built, test flights were made, the Type Certificate was obtained, and finally the S-l Swift glider was launched.

The success of the SWIFT glider allowed the company to obtain an order
from MDM Ltd. for the project of a two-seater aerobatic glider,

which led to the commencement of work on the MDM-1 Fox glider.
On July 27, 1994, the new glider received a Type Certificate.

In 1999, based on previous experience and preliminary work carried out previously,

work began on the prototype of the jet training aircraft Iskra II with a 1300-1500 kg engine. The aircraft with the new name “Bielik” was test flown in 2003.

In parallel to aviation production, the company participated in projects related to other production areas, which was the production of a rotor blade (diameter 44 m) of a wind power plant made of glass fiber reinforced composite with a capacity of 1000 kW.

In 2001, work began on a new aviation structure:

the EM-11 “Orka” executive aircraft, which was test flown in 2003.
After building another two prototypes, two pre-series aircrafts, conducting a number of ground tests as well as flight tests and completing evidence documentation, on April 8, 2011 the EM-11C Orka aircraft obtained the Type Certificate.

Obtaining a Type Certificate for the SWIFT-1 glider

issued by the European Aviation Safety Agency – Certificate no. EASAA038. 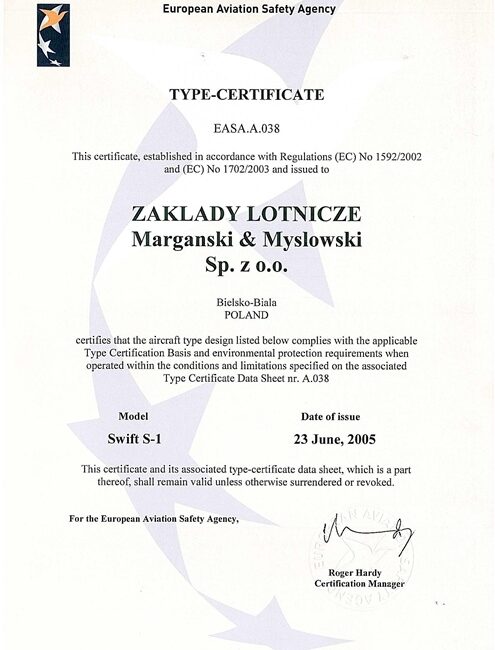 by the European Aviation Safety Agency for the MDM-1 Fox glider – Certificate no. EASAA039. 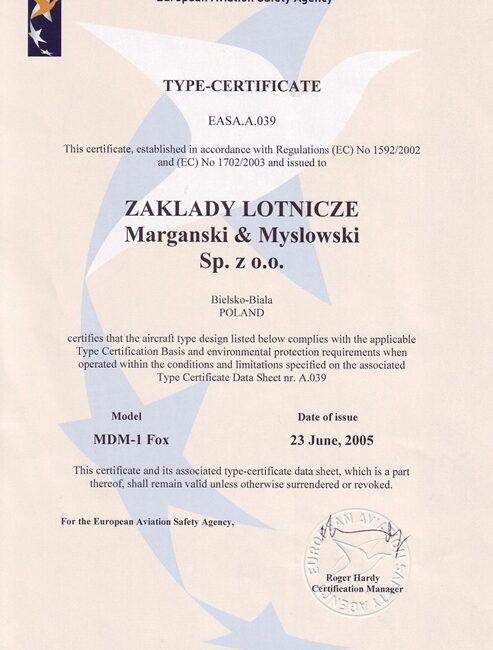 for the best designed products on the Polish market, six main prizes were awarded in three competition categories as well as special prizes.

Dobry Wzór is a mark awarded every year by the Instytut Wzornictwa Przemysłowego (Institute of Industrial Design) to products that have a high level of design. The competition has been organized since 1993.

In each edition, among the products awarded with the Dobry Wzór mark, the award of the Minister of Economy – Wzór Roku (Design of the Year) is awarded.

The EM-11C Orka aircraft received two awards:
Wzór Roku 2006 (Design of the Year 2006) – a special award from the Minister of Economy for the best product designed by a Polish designer and manufactured by a Polish entrepreneur. 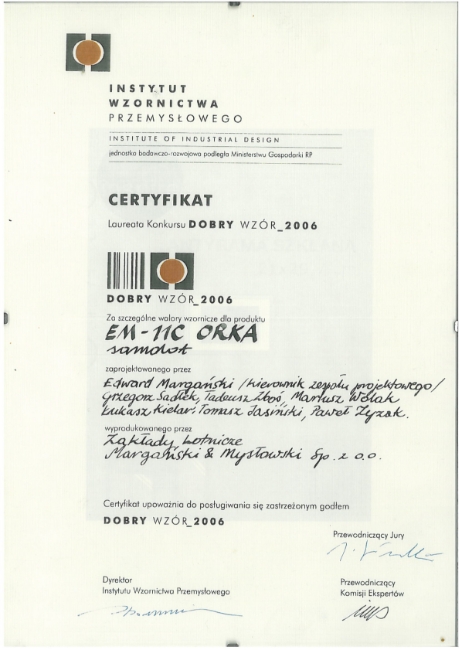 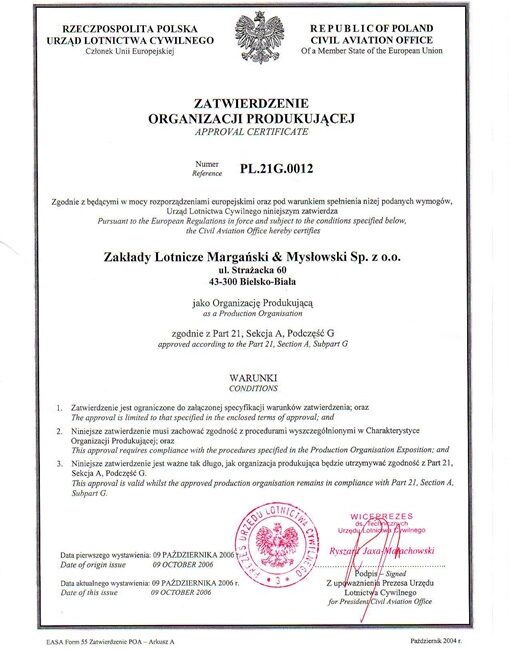 At the beginning of October 2011, Zakłady Lotnicze was transformed into a joint-stock company,

Approval of Zakłady Lotnicze Margański & Mysłowski SA as a Designing Organization in accordance with PART 21 Subpart J, according to Regulation (EC) 1702/2003. 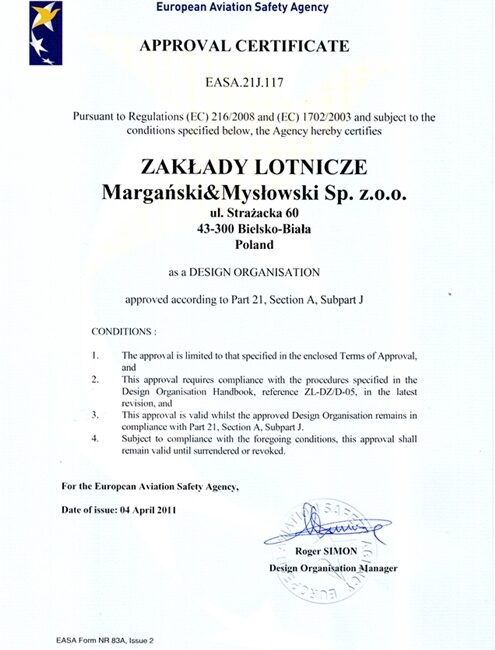 by the European Aviation Safety Agency for the EM-11C Orka aircraft – Certificate no. EASAA115. 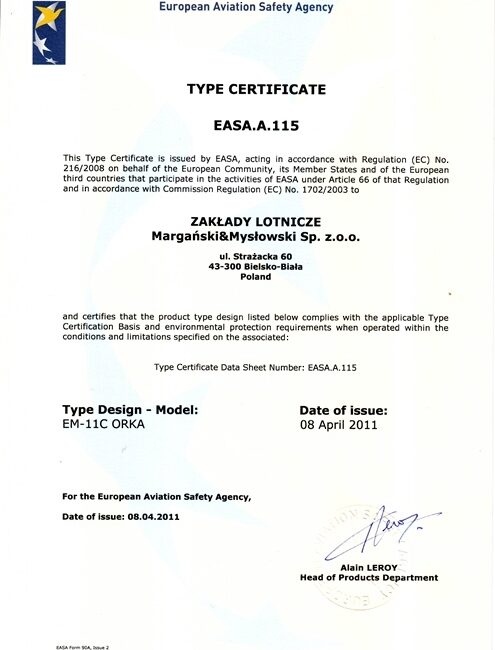 issued by the American Aviation Safety Agency for the MDM-1 glider – Certificate no. FAA G00069CE.

Our product – MDM-1 Fox glider – received the Znak Jakości (Quality Mark) and an Extraordinary Distinction in the category “Best Brand” in the 5th edition of the National Competition and Consumer Advisory Program for Companies “Laur Eksperta”. 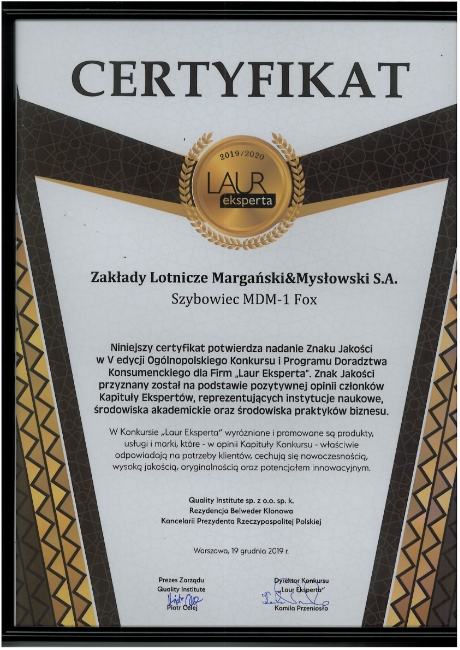 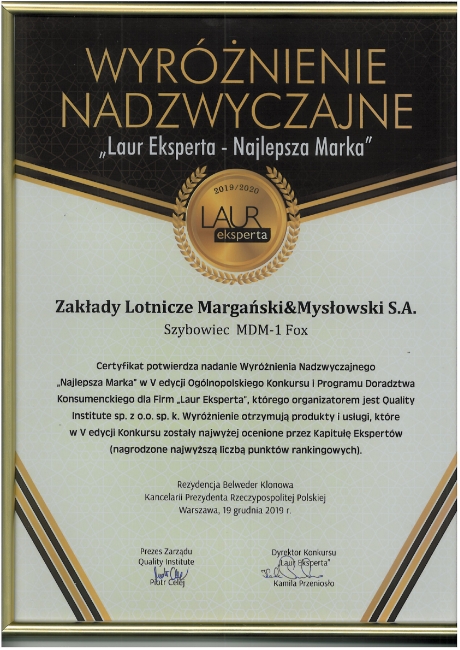